A good chunk of the internet went dark this morning.

Anyone that tried to access Amazon, Spotify, Reddit, The New York Times, the BBC… got a big, fat error message.

And that’s not the extent of the list. A U.K. government website also got wrapped up in the blackout.

All problems led back to one company — Fastly Inc.

It happened because of a glitch… and Fastly got back up and running again in no time.

But should we be concerned that issues a single cloud firm is experiencing can bring down a huge chunk of the internet?

The Few Controlling the Many

Fastly is a U.S.-based cloud computing company. It runs one of the largest content delivery networks (CDN), which is a group of servers spread across the world.

It improves load times for websites and acts as a buffer between consumers and the dot-coms they frequent.

So when Fastly installed a bad service update this morning, users were met with error messages when trying to access sites.

But most internet traffic is served by CDNs like Fastly… so a bad service update can mean a widespread blackout like the one we saw this morning.

Like I pointed out, Fastly did bring everything back online swiftly.

But here’s the issue… 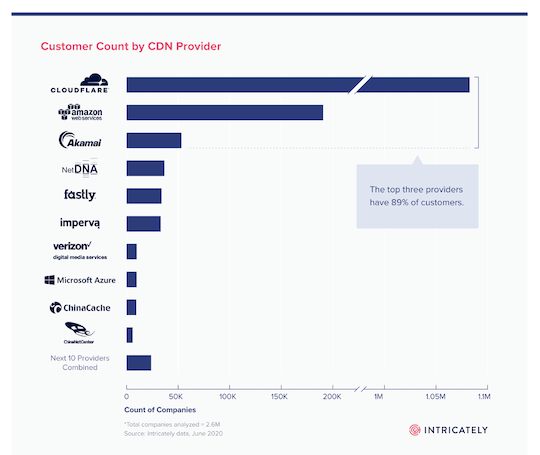 Tech is consolidating and the companies at the top are taking up more and more room in the industry.

Antitrust issues aside, the consequences of this consolidation are something like what happened this morning.

I’m not one to make a mountain out of a molehill, but as you can see above, Fastly isn’t even in the top three of this market — yet was still able to single-handedly take down part of the internet.

It’s not as though the Street crucified Fastly stock. I fact, it looks like its correction was taken positively by investors.

Here’s the thing, though…

When we rely on just a handful of companies to run our internet, things can take a turn for the worse in a flash.

And with the huge amount of data exchange we require from the web nowadays, blackouts can have lasting effects and can even be dangerous for your own privacy and information.

Kudos to Fastly for spinning this around so quickly, and a big thanks to them for exposing how fragile our network truly is. I have a feeling that the more we know, the more we can decentralize this concentrated industry in the future.