Mining Bitcoin With Equipment From the 1800s!?

Can you mine Bitcoin with equipment built in the 1800s? It turns out the answer is yes.

A 124-year-old hydroelectric station in Mechanicville, New York, is turning some of its power production to something more profitable than selling it to the grid, according to a story from the Albany Times Union. It’s mining Bitcoin.

The plant, built in 1897 and operational a year later, was essentially abandoned by power company National Grid before a local engineering firm bought the facility. Here’s what the plant looked like in 1898: 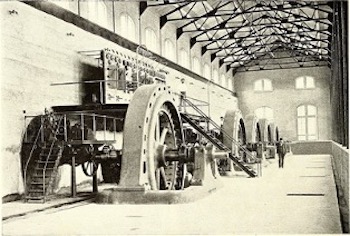 Much of that equipment is still in operation today…

The hydro facility makes around 3 cents per kilowatt-hour selling power wholesale to National Grid. But they’ve been buying used servers to mine Bitcoin with some of their extraordinarily cheap power.

Mining Bitcoin earns three times as much money as selling wholesale power, according to the owners of the plant.

For the last few weeks, we’ve been looking at the shift in Bitcoin mining capacity from China to other corners of the world. The Mechanicville story is just the latest piece of the puzzle.

Bitcoin miners are making the move from the People’s Republic to places like Kazakhstan, where a firm called Enegix has moved a massive datacenter to the town of Ekibastuz, a city that’s home to one of the largest coal-fueled power plants outside of China. That dirt-cheap power makes the region an attractive place to mine.

Here in the U.S., the power mix is going green to avoid regulatory risks.

And Bit Digital CEO Bryan Bullett told Bloomberg that he guesses around 500,000 mining rigs are being shipped out of China right now.

China’s crackdown on Bitcoin mining was one of the key factors that led to Bitcoin’s steep correction in May. But hash capacity is coming back online in significant numbers.

It’s an important reminder that even in a digital currency, there are some decidedly physical limitations – like how quickly operators can find new locations and then pack, ship and set back up thousands of mining computers. But it’s also a clear reminder that when it comes to cryptocurrencies, free markets will ultimately prevail.

For now, Bitcoin prices continue to carve out a bottom on their chart – and the breakout-above-$40K, breakdown-below-$30K trade continues to be in play as Bitcoin quietly chops in between those two key levels.

On balance, I think the $40K move still looks like the far more likely of the two. Stay tuned.

The Three Lessons I Learned From My Biggest Loss Ever

J-Rod shares three lessons he learned from the biggest trading loss of his career.