Did You Miss out on This $250K Profit-Opportunity?

Every morning at 8 a.m. sharp, my robot butler whirs into action.

It’s not as ridiculous as it sounds… just my Roomba keeping things tidy.

When you hear robots are taking over, this might be the first thing you think of… 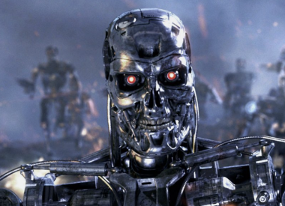 But my Roomba doesn’t have glowing murderous eyes and the desire to take over the human race… just the tendency to get stuck underneath the couch every once in a while.

The truth is, robots and the robotics market at large look a lot different than we imagined years ago.

Which is why it’s sometimes easy to forget how much they’re invading our daily lives.

In the manufacturing industry alone, there are already 228 robots for every 10,000 workers… and the rate of automation is growing by 10–15% per year.

And it’s estimated that robots have already displaced 400,000 U.S. workers — a figure that will likely rise above 5 million by the end of the decade.

But “robots are stealing our jobs” isn’t the narrative I’m looking to share with you today.

According to the World Economic Forum, robot automation will result in a net increase of 58 million jobs and add $1.2 trillion to the U.S. GDP in the next five years.

Even though workers are “displaced,” when robots take over repetitive or even dangerous tasks from humans, it frees us up to do other types of jobs in those same fields… including supervising the robots.

The machines are also generating vast amounts of wealth elsewhere — most notably in the stock market.

Take Roomba as an example. These robot vacuums are made by a company called iRobot (NASDAQ: IRBT).

It’s not the only company dealing in robotics that saw huge gains over the last year, either.

But today I want to focus on one industry that’s really seeing a huge integration of robotics, which is setting it up for profits.

They’ve been all over the news in the past few years.

You might not think of them as part of the robotics industry, though.

But whenever a technology starts operating outside of explicit human control, it becomes more and more part of the robotics family.

The implications of this tech are huge for a variety of reasons.

Delivery companies, taxis and even morning commutes would be made safer by autonomous vehicles.

And big companies have taken notice, investing billions already to be the first to get their product on the market.

Amazon is of course in the thick of it. It should come as no surprise that the tech titan wants its delivery services automated.

And Google and Apple are getting into the game, too, wanting to use the technology for their own personal benefit.

Even Warren Buffett — who’s famously anti-tech — has put billions of dollars into major companies working on this new technology.

Everyday investors are getting in on the action, too.

Consider that Tesla’s stock shares which anyone can buy with a standard brokerage account, shot up from under $5 to $880 in the past decade.

But don’t worry, you haven’t missed your shot at making money from the self-driving car revolution.

In fact, back in 2017, a research firm valued the autonomous vehicle (AV) market at $24 million.

We’re still following several opportunities for you to collect a fortune as the industry takes off, so stay tuned.

How to Get Free Bitcoin From Your Credit Card

Visa (NYSE: V) and Mastercard (NYSE: MA) are getting into the crypto game. That means you can get free bitcoin from your credit card…